In October 2010, Tracy and I went to Detroit to attend the American Society’s Annual General Meeting. While there, many Americans came up to us and told us how much fun they had had at the 2004 Joint Canada-US Branches Conference and Annual General Meeting, which the Canadian Branch hosted in Toronto. On the way home, Tracy and I decided to see if it was possible to host a second Joint AGM in Toronto. We approached the American Branch and our own executive with the idea and plans were made for the Joint AGM to be held this past October.

In the months leading up to the Joint AGM, Tracy and I met several times, spoke a lot on the telephone, and we shared our progress on the event plotting, and planning through our blog.

The Second Joint Canadian-American Branch Conference and Annual General Meeting was held the last weekend of September in Oakville at the Hilton Garden Inn Toronto/Oakville, where most of the attendees stayed for the event.

The Joint AGM formally began with registration at the hotel on Friday at four in the afternoon. Attendees were given a cloth bag with a logo especially designed for the Joint AGM. Inside the bag were white chocolate roses, a hand-bound AGM conference booklet with a pig-shaped paperclip on it, a pen from the British Consulate, and, if the person were one of the first 36 registrants to sign up, they got also got a mug from the British Consulate.

That evening, we invited people to gather at six in the registration room for a light buffet dinner. Usually attendees are on their own for the first meal of an AGM, but we thought it was better to have everyone together to allow people to see old friends and make new ones. The buffet was so popular that the delay in showing The Name of the Rose that night was hardly noted.

The next morning we had two speakers. The first was a surprise for our attendees, David J. Brunelle, who spoke about A Soldier’s Life - The War of 1812. Tracy had arranged this talk as it was the bicentenary of the War of 1812, the war and our Joint AGM both involved Americans and Canadians, and the War was fought nearby. David brought replica costumes and weapons from the War, which people were allowed to handle. Attendees were very receptive to the talk, which was a lovely way to begin the day.

Next was Arlene Okerlund, a Professor Emerita of English and member of the American Branch, who spoke about the enigmatic Elizabeth of York, wife of Henry VII and niece of Richard III. Arlene has written several books, including one about Elizabeth, which we had copies of to sell after the talk. Her subject proved so interesting that we actually ran out of the copies.

After lunch, we had Susan Bond, a freelance classical production dramaturge, who gave a talk about Richard III as portrayed in modern theatre. Susan looked at the recent revivals of Richard III, such as the production by Kevin Spacey and several Toronto-area productions, some of which Susan had taken part in.

Our final speaker of the day was Ariella Elema, who had just completed her Ph.D. at the University of Toronto, who presented a paper on "Teaching and Learning Swordplay in Late Medieval England," which discussed the current state of knowledge on the subject of English swordsmanship between 1250 and 1500.

After Ariella’s presentation, the two Branches separated for their own AGMs. Following the AGMs, members of the Canadian Branch assisted with the sorting of the silent auction items. We had many donations for the auction, the majority of which were books, and had bids on most of the 140 items.

Then, attendees had some free time to relax or change for our banquet dinner. Dinner was at six and diners were entertained with the music of Hurly Burly, a medieval and renaissance musical group from Peterborough, ON, who performed during the meal.

Dinner attendees were given a bookmark, sugared almonds (a medieval treat) in a bomboniere bag with a white rose hand sewn on it, a white origami boar, and a York rose brooch, all handmade, along with a scroll with the dinner menu printed on it. The table (in a u-shape, with people sitting on both sides of the arms) also had eight white rose centrepieces and six manners cards featuring a quote from Geoffrey Chaucer’s The Canterbury Tales describing the dining conduct of the Prioress.

After dinner, tickets were drawn for the Americans’ raffle and the silent auction winners were announced and given their prizes. Then, the remaining guests played Ricardian-themed games, such as Ricardian bingo and pass-the-parcel; the latter was won by our treasurer, Doug Woodger.

After a long day, our attendees headed back to their hotel room or to home for some much-needed rest and relaxation.

On Sunday, we gathered, some a little worse for wear, for our last speaker, Jonathon Hayes, who had become the Chair of the American Branch the day before. Jonathon spoke about François Villon, the 15th-century French poet, who was the original “bad boy.” The paper was not only an analysis of his poetry, but also an attempt to bring to life the lower strata of 15th-century society.

At the end of Jonathon’s talk, the Joint AGM was closed by our Chair Tracy with a few gifts given to people who had assisted with the event and a few well-chosen words and wishes for safe journeys home.
Posted by Richard III Society of Canada at 6:06 AM No comments:

(Posting by Victoria)
Posted by Richard III Society of Canada at 4:27 PM No comments:

Two weeks from now, we will be gathering in Oakville for our AGM Conference.

This is a truly exciting time to be a Ricardian!

Tracy and I have lots planned for you and we are really looking forward to seeing you at the hotel.

P.S. Thought I would share a picture of my dining room table as it is this morning, covered in Ricardian projects. 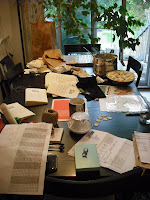 Posted by Richard III Society of Canada at 5:11 AM No comments:

Here are two more books for the Silent Auction:

Life in a Medieval Castle (Joseph and Frances Gies, paperback) *
The Four Nations: A History of the United Kingdom (Frank Welsh, hardcover)

* This past weekend I saw my parents and we were discussing the upcoming AGM. My father kindly offered to donate some books. He disappeared and then reappeared with a couple of books, one being my mother's copy of Life in a Medieval Castle. My mother said she could always borrow my copy.

(Posting by Victoria)
Posted by Richard III Society of Canada at 5:34 AM No comments:

Lots of information to pass along…

CONFERENCE REGISTRATION
There is still time to register for the Joint Canada-US Richard III Society Conference and AGM being held in Oakville, Ontario the weekend of September 28-30. Owing to the catering requirements however, we will not be accepting conference registrations after TUESDAY, SEPTEMBER 25. You may scan and email your completed registration form to "tbryce [at] cogeco [dot] ca"  or fax it to 905-634-7857.

HOTEL RESERVATIONS
Unfortunately, the unsold rooms of our reserved block returned to inventory on August 31, but if you state you are with the Richard III Society, and ask to speak to Becky (Rebecca) Van Clieaf, the Sales and Catering Manager, you should be able to get the conference room rate of $109 Cdn. per night. You must call Becky directly at 905-829-7980.

TRANSPORTATION FROM PEARSON AIRPORT
If you are flying in to Pearson (Toronto) airport, and have not made your own arrangements to get from the airport to the hotel, please contact me immediately at "tbryce [at] cogeco [dot] ca" so we can try to accommodate you.

VOLUNTEERS NEEDED
We are in need of willing hands for the following tasks:
Please email Victoria at "vlmoorshead [at] rogers [dot] com" if you would like to volunteer for any of these tasks.

BRING YOUR CASH!
We will have 10 copies of Dr. Arlene Okerlund’s book, Elizabeth of York, available for purchase at the Conference for $40 Cdn. No doubt, Dr. Okerlund would be happy to sign a copy for you.
We shall also have a few copies of the National Portrait Gallery’s poster of Richard III for sale.  The NPG tell us they are no longer printing and selling this poster, so once they are gone, they’re gone!

We look forward to seeing you later this month!

Tracy
Posted by Richard III Society of Canada at 3:14 PM No comments:

An AGM update in numbers

1 = The number of mystery speakers, whose identity and topic are under close wraps (all will be revealed at the AGM)

2 = The price of a Morris McGhee raffle ticket, or three for $5, or seven for $10 (you don’t have to attend the AGM for your chance to win one of the prizes)

35 = The number of registrants so far

65 = The cost in dollars of the banquet, which will also feature mediaeval music, games, and prizes galore

144 = The number of items in our silent auction so far (get your holiday shopping done early!)

1327 = The year The Name of the Rose, our Friday night Ricardian movie, was set in

(Posting by Victoria)
Posted by Richard III Society of Canada at 12:45 PM No comments:

The Richard III Society of Canada is donating the duplicated items from the silent auction donations to the American Society's Morris McGee Raffle:

(Posting by Victoria)
Posted by Richard III Society of Canada at 4:51 AM No comments: